President Obama signed the Violence Against Women Reauthorization Act on March 7, 2013.  Among the new provisions of the Act is a requirement that universities provide prevention and awareness programs that educate students about prohibitions against sexual violence, including dating violence and stalking.  Many campuses chose the online course from Agent of Change, including Princeton and Northwestern (click the Campus button for the complete list).  Students must complete the course to register for classes.

The course is blatant brainwashing.  The agenda includes:

Ultimately the goal of the brainwashing is to send more people into the mental health system so that they can be diagnosed with one or more disorders that will surely disable them or cause death if untreated.  Furthermore the constant obsession with alcohol is used to coerce more students into alcohol treatment.

Students are trained in specific psychopathic behaviors like how to act in an abusive relationship, how to stalk, and how to harass each other. 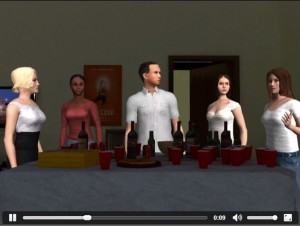 There are some truly sickening scenes in the online training course. It is seemingly endless — it take at least 4 hours to complete.  Evidently the students have nothing better to do?  The lesson that students should be taught is: Do not rape or drug someone and being drunk or high is no excuse to rape or to assent to unwanted sexual contact.

Other lessons in the course include the fact that the root cause of violence is ‘disrespect’.  For example, if someone makes catcalls then this gives other people the idea that it’s ok to disrespect and rape others.  Yes, this is the actual logic used in the course.

In fact, the root cause of violence is failure to teach children basic moral principles.  This course only teaches kids how to act like psychopaths.  It’s truly repugnant.

The course is divided into about 60 segments each of which takes a couple minutes to complete, and are followed by multiple choice questions, which determine the follow up videos.  The students are told that responses are completely confidential and there are no consequences for ‘wrong’ answers.  However, answering the ‘wrong’ way often results in more videos that the student must sit through.

The course uses vile, offensive, and demeaning language.  This course will undoubtedly increase the incidence of sexual assault, binge drinking, bullying, harassment, ‘mental illness’, and psychopathic behavior on campus.  This hypothesis is easy to test just by comparing campuses with lower participation.  A control group should have been built into the law but of course wasn’t.

Agent of Change is run by Carol Mosely, M.A. and Jeffrey S. Bucholtz, M.A.  The web site was created by Dog and Rooster.

Here are the actual transcripts that demonstrate the rape agenda.  The videos can be viewed at https://agentofchange.net/videoclips/:

1-howsgoin.mp4
2-heyana.mp4 – Miguel, this party won’t get going for a while. I’ve got a deck of cards, there’s a big table in the other room, wanna play some poker?
3-sweet.mp4
5-letsgo.mp4 – Totally. I heard this party is going to get pretty big.

(School is one big party and everyone gets drunk and everyone’s a superficial jerk and it’s normal to leave the empties out for days.  Just like the movies.)

(Inoculate incoming students to disgusting stereotypes and lewd language – this is normal behavior.)

(Getting wasted and raped happens all the time.)

(College students talk endlessly about getting drunk and wasted and raped.)

(Mindless blather modeled for the incoming students supposedly to reassure them that not all guys are rapists.)

(Pretzel logic to confuse everyone but the bottom line is if a girl is drunk then the guy is raping her.)

(Guys are always scheming and talking trash about girls.)

(Everyone is playing games, might as well get used to it – ‘decent’ guys finish last.)

(Denial of being a rapist makes you a rapist.)

(Getting drunk is expected.)

(Getting drunk will take you out of commission for a couple days, and results in rape.)

(If a girl is drunk then she was probably raped – ask if ‘something happened’.)
scene3_08.mp4

(If a girl is raped she won’t report it but that doesn’t mean it didn’t happen.)
scene3_09.mp4

(Sexual assault happens all the time – Believe it, even if your ‘friend’ is the rapist!)

(Yelling at girls leads to raping.)

(Rape survivors can’t stop rape – it’s up to everyone.)

(How to reinterpret a relationship to make it abusive.)

(How to blame the other person for the ‘abusive’ relationship. How to use ‘love’ to justify irresponsible behavior in some cases and not others.)

(Stalking has become the norm – everyone has a stalker now.  More blather on the nature of love vs stalking.  Tips on how to act like a stalker.)

(Get everyone involved in your drama.)
scene5_6.mp4

Kids have nothing better to do than tease each other.
scene6_3.mp4

(This harassment happens all the time, and revenge is normal and expected.)

(The law of the jungle in the dorm rooms.  Tell on people to get them in trouble and ramp up the drama.)
scene6_5.mp4

(Yeah you’re a rapist cuz you had sex with a drunk girl.)

(Blame your parents and everyone else for being a rapist.)

(And it’s ok for them to be friends.)

(And this is better than studying math how?)

(How to ruin the innocence of sex.)

(So even if you talk about it first it can still be bad sex.  How to be totally lame.)

(Jill and Scott got drunk and Scott raped her so she’s leaving school.)
scene09_02.mp4

(How to make up reasons for why you didn’t report the rape immediately.)

(Go back to your high school counselor if you get raped in college.  And you will need a therapist yourself if your friend is assaulted.)

(You are powerless to being sexually assaulted, even as an adult.)

(If you don’t believe it it’s because you’re in denial and probably mentally ill yourself.)

(Being told about a sexual assault is a badge of honor.  Don’t be ashamed if you put yourself in a position to get raped, or at least to later claim ‘rape’.)

(How to pretend to respect someone so that you can rape them later and no one will suspect it.)

6 thoughts on “The Rape Agenda”