Ye have been rebellious against the Lord from the day that I knew you.  (Deut. 9:24)

Cooties and alcoholism are two devastating scourges both characterized by denial, the persistence in which only ‘proves’ you are already afflicted.  Whereas cooties is more likely to infect children, alcoholism and addiction tend to affect adults, especially by middle age, when they recount a long sordid history of substance abuse and mischief in AA drunkalogs, before coming to acceptance after decades of denial: the 12 Steps saved them from the deathly disease, which will surely be your own undoing.  The strength of denial has a perfectly scientific explanation, as Nora Volkow of NIDA explains: ‘Addiction is a disease of free will’.  She would know, as her own grandfather died of it.  (As compared to say Bolshevism, which while just as deadly, has not yet been associated definitively with any dopaminergic pathways.) 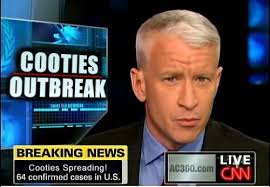 Of course these completely fake diseases may feel very real to those so diagnosed, even as the old-timers proclaim: “We let you decide for yourself but if you’re not an alcoholic then what are you doing here?”  They are based on a series of cult tactics and cognitive fallacies that exploit common vulnerabilities that arise at various stages of human development.  Similarly, schizophrenia is a collection of cognitive fallacies that mimic a disease.  “But Schizophrenia is a real disease!  There is scientific proof!”  LOL no.  As with other fake diseases, all such claims crumble under a little scrutiny.

Schizophrenia is a ‘mental illness’ characterized by disordered thinking, paranoia, and sometimes frightening visual and auditory hallucinations.  However, upon closer examination we discover that all these symptoms are simply the result of progressively layered cognitive fallacies.  Recently, a computer program predicted with 100% accuracy which children would later experience psychotic breaks.  How did it do this?  Simply by examining the child’s own speech for admissions of lying and incoherent jumps.  Well of course if you allow a child to lie, confabulate and blather, and don’t chastise them, then how would they ever know?  In the child’s own mind the logical leaps are perfectly acceptable, and the inevitable reductiones ad absursdum inure them to solecism.  Children and adolescents naturally go through successively deeper phases of cognitive re-evaluation, which can be confusing and stressful.  What happens when both their knowledge is faulty and the process by which to evaluate it?  The resulting moral and logical relativism can be disastrous.  It is not hard to see how an imaginative child with a history of increasingly intricate confabulations can start to externalize them in adolescence, even if they were once instinctively under their control.

Thus schizophrenia is not a disease at all: it’s a compacted cognitive fallacy.  It is highly reversible and highly preventable, even as the experts call it a ‘progressive disease’.  Children must be held accountable to the logic and coherence of their narratives.  It’s fine to have fantasies and creative thinking, but they should not be allowed to get the better of them.   Often parents are spellbound by their children’s creativity, or they fear injuring their child’s self esteem, or they fear criticism will push away their little friend.  It’s up to both the parents and society as a whole to ensure that children are not left to their own faulty devices.  “But children are born good!”  Yes, they are.  But that does not mean they are born with infallible logic skills.  Nor are they perfectly self aware.  We all have a great ability to deceive ourselves and others without even realizing it.  The child with a long history of magical thinking is not intentionally becoming schizophrenic as their mind habituates to ever greater aberrations;  even as the parents are reassured; “It’s just a phase.  Don’t chastise the child for their creativity.  And don’t worry if he develops an illness, we have a treatment for that.”

The Oppression of Logic

Children are naturally rebellious, though they are not conscious of it.  We all are.  It’s natural, and it’s an effective way to discover boundaries.  Some children need a little more help than others to hold them accountable.  Such children may strongly resist discipline, but if they are not eventually chastised then ultimately they are more likely to engage in crime and mental illness, and drug abuse, which is often the scapegoat for both.   Children crave structure, boundaries and discipline even as they protest them.  Temper tantrums are a good example of this dynamic, though the ‘enlightened’ parent, suppressing natural instinct beyond all reason, indulges the child, falsely believing that he must learn right and wrong on his own and any reprimand will result in low self esteem and further rebellion and stunted development.  The resulting dynamic of mutual entrenched resentments can progress to autism, though most children raised this way will be fine if a bit neurotic.  Some will later claim, “My parents tried to discipline me, but I’m proof that it doesn’t work.”  The truth is quite the opposite: the discipline was simply too little too late, even if the experience of it is seared in the child’s memory.  It’s another common cognitive fallacy based on selective memory.

We naturally assume that children can discern the rules of logic on their own, as well as right and wrong – of course with the help of Barney the Dinosaur and Law and Order reruns.  Religious education, which had provided such training to previous generations, is no longer considered essential.  We believe fundamentally in the ‘good nature’ of people, and that any deviations must represent a disease or disorder.   Parents therefore turn to science and modern medicine to cure their children of rebellion and mischief, and these industries are happy to oblige and allay their fears: “It’s not your fault.”  They are quick to blame ‘brain chemistry imbalance’ and ‘religiously inspired intolerance’ for the child’s misbehavior, not unlike the middle age’s epidemic of “demon possession”.  The modern ‘science’ of psychiatry is little more than a rewarmed amalgam of phrenology and medieval humoralism.

The Schizophrenic’s delusions and hallucinations are just compacted cognitive fallacies – the latest in a lifelong trail of conceits.  Fueled by a continuous natural impulse to test boundaries, small quirks that once were harmless and cute may start to blur the line between imagination and lying, and can become very maladaptive.  The adolescent himself is baffled as to why his own habits of mind are unprofitable, and why he is spurned without cause.  This presents a profound conundrum, which can easily be exaggerated and feed on itself towards destruction.

Paranoia is a common outcome, and popular and pernicious because it is irrefutable: there is no way to demonstrate to your satisfaction that, for example, the government isn’t out to get you.  After all, isn’t that exactly what they want you to think.  It’s a royal joke, and nourishing fodder for years of psychiatric antics, even as it belies a deeper rationality.  Anti-psychotics usually prescribed in such cases (and which represent the single largest drug class by revenue) may suppress outbursts but they do so at the expense of health: long term use has been proven to shrink brain regions.  Doctors often say, “Schizophrenia is real, and brain scans prove it!”  Of course, it is now well established that long term, high dose ‘treatment’ is the real cause of this ‘disease’.

Why does no one provide the child with the help and direction they so obviously need?  Why does no one care?  In fact that is the very question the child asks himself, unconsciously, as he acts out in increasing desperate protestations and ‘cries for help’.  (Other forms of acting out include ADHD, anorexia, and depression, while children who dabble in drugs and alcohol may present with addiction or ‘bipolar’ disorder.)  Schizophrenia is a temper tantrum for young adults – a strategy to force others to notice and correct them.  And of course the mental health industry is happy to oblige.  They can charge $1000/day for a stay at a mental hospital which only reinforces the underlying dysfunctions.

Caregivers persist in similar cognitive fallacies, as exemplified in the following statements used against those who question the disease:

(Again: beware the disease that lists denial as a symptom.)

The doctor employs the same cognitive fallacies to suppress skepticism of the scam that he diagnoses in his patient as proof that it’s real: ‘Everyone else is wrong’ is per se evidence of illness.  The same habits of lying that manifest as psychosis also lead to the medicalization of it and the intimidation and bullying to shut down criticism.  The latest results are then published in the DSM, which the newly diagnosed schizophrenic can then study for symptoms and exaggerate as necessary, to be validated by the physician.  It’s a vicious and ironic cycle.

The Fallacy of Good Intentions

Human beings’ greatest cognitive fallacy is the belief that we are naturally good: “I know I’m a good person with good intentions so talk of sin and mischief is meaningless to me.”  One implication of this moral blind spot is the modernist belief that religion fundamentally misunderstands human nature and imposes burdensome and unnecessary rules, and that if humans behave badly, it must be due to an illness or fanatical religion.  However there is no reason to believe that humans are naturally good if left to their own devices, only that is what we want to believe.  We are master justifiers.  The irony is that we reject religion for warning us of exactly this dynamic.  One result of this delusion is that the child, once ensnared in their own web of lies, is baffled by ever increasing confusion, and the people around them treat them as ‘sick’.  Of course this only makes the problem worse.  In this situation the children must be taught that there is nothing wrong with their brain, only that they need to be held accountable to the rules of reality, even as they offer every excuse to resist them.  (And even if no one actually wants to do the work to teach them.)

Just as the parts of our own brain communicate with each other effortlessly and mostly without error, so too the brains between humans communicate with each other largely unconsciously.  We are not aware of all the communication that goes on, even as we watch it in others.  For that reason we are highly reliant on others’ feedback when we transgress.  Of course, self-reflection provides some direction as well.  But even these techniques are fallible and easily dismissed: “Oh they are not honest.  Oh they are just jealous of my abilities.”   Left to our own devices we will engage in endless mischief, rebellion, delusions,  and magical and wishful thinking.  This occurs both in individuals and self-reinforcing groups, like the Nazis, ISIS, AA, and the psychiatric industry.

We actually share brain power with each other and are not nearly as individualistic as we’d like to think.  In fact our individuality is another delusion to accompany that of our natural goodness, and may explain our reticence to speak out against tyranny even as we are encouraged to do so.

2 thoughts on “Cooties for Grownups”