The word fascism literally means bundle.  The idea is that a bundle of sticks is stronger than each individual, and thus harder to break.  This is certainly true but of course you can still peel off the sticks one at a time and break each individually, which is pretty easy.

Fascists are genocidal, though their target group can be anything including race, religion, nationality and even political belief.  Sometimes they are cannibalistic – attacking themselves.  Also fascists like to rape and plunder – this is a big part of the appeal. 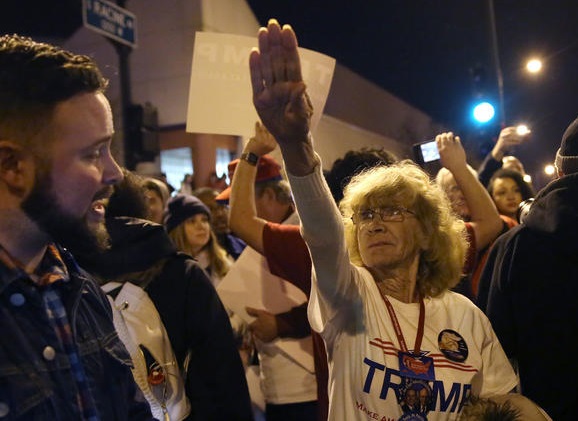 We are all fascists.  A few people are overt fascists but most of us are in denial.  What type of fascist are you?

This is a white nationalist fascist who supports Trump.  They oppose muslims, illegals and blacks.  They scream in delight when he says, “Bomb the hell out of them” and “Build the wall” and “What do you have to lose?”

This is Jew Supremacism and a militaristic theft cult.  It takes its cues from the Bible which they believe instructs them to conquer the land of Israel.  They have raised their sights to the entire Middle East, which is why they are instigating a fight with Iran.  They fan the flames of ‘antisemitism’ around the world to scare Jews to move to Israel, though this can result in genocides like the Shoa.

This is Muslim Supremacism and is modeled after Zionism.  Their core belief is that “You are a good person so trust your conscience”.  Of course the irony is that they are fascists-in-denial, like the rest of us.  They are a foil for the Trumpkinists and the Radical Bombisists.

This is the prototypical fascist.  Their primary target is the Jews but they will attack anyone.  Like most fascist groups they blame the Jews for ‘corrupting the blood of our youth’.

This is the soft fascism of laziness of corruption.  Their core belief is that the US ‘hacked’ their country to make them sad and alcoholic.  They spend their days spewing ‘Whataboutism’ on internet message boards but are easy to identify due to their signature: receipts denominated in rubles and a ‘spoofed’ IP address.

Poor Poland has been targeted and oppressed by both the Nazis and the Russians.  As a result they espouse a relatively pure and simple oppositional fascism: “We Want God”.

This fascism is based on the drug war with the help of military aid from Uncle Sam.  Their doctrine is a mix of “Killing is Fun!” and “I think I seen him doin’ drugs!”

This fascism is based on propaganda by their Dear Leader, who is propped up by Russia and China to extort the West for trade concessions and IP.

This Jewish fascism claims to be anti-Zionist to throw you off their true purpose: to establish a ‘democratic’ theocracy in Israel in which they can sexually abuse their own children and insist that this is ‘holy’.  Also, we will all be their slaves upon the return the Messiah.

Under their leader Narendra Modi, Hindu nationalists in India attack Muslims for disrespecting ‘sacred cows’.  They also partner with the Israelis to create a police state and vow to align with Netanyahu and Trump against Iran under the leadership of Nikki Haley.  Also, Pakistan.

Fascism need not be nationalist.  There are also ideological forms of fascism.

Socialists hate their own grandparents for reasons you don’t want to know.  As a result, they renounce any responsibility for them and demand the government take care of them.  Any taxpayers who balk at this are accused of ‘murder’ (ironically enough).

These fascists are united by their admiration for Bill W, who prowled 12 Step meetings in search of young women to harass.  They also enjoy exploiting their own members for labor and sex and bullying newcomers to suicide, whose deaths they then tout as ‘proof’ of their dreaded disease.

Their core doctrine is “You’re a good kid with a good conscience (that is not at all fascist).  So if you massacre school children it’s because you forgot to take your pills that morning!”

Having failed to teach their children right and wrong, these people are now terrified of them.  They also believe that a War on Guns will reduce violence and death.  “It’s just common sense!”™

Believing that Russia ‘hacked’ the election, these fascists insist: “They used our freedoms against us! To corrupt our minds and poison our blood!  We must restrict our rights or we’ll end up like them!”

This group is composed primarily of community college associate professors.  Their rallying cry: “Kill the fascists!”