NA thug Johnny Panic was furious at AddictionMyth for exposing the truth about his butt buddy Dan Genis.  So he ‘followed’ AddictionMyth on twitter and changed his photo to a ‘Gun & Skull’ as a threat to the blogger.  He then tweeted:  Just watched “how to get away with murder” it could easily become my favorite new show.

Dan Genis commented: “The man was always very gentle with me.  Even though we’re not in prison anymore, I still have great fondness for him.  So I won’t speak out.  Plus I wouldn’t want to be another one of his victims.” 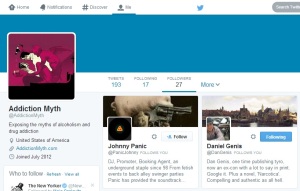