Nature: The Development and Maintenance of Drug Addiction 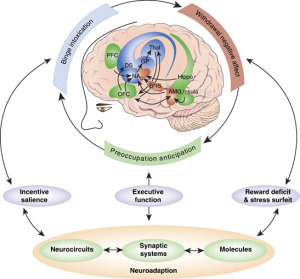 My experience with human heroin addiction stems from 1953 to 1955. Having one whole year as a psychiatric resident at Creedmoor State Hospital, I transferred to the USPHS Narcotic Hospital at Lexington Kentucky. I was placed in charge of the admission service, the 70 bed withdrawal service, the 200 bed women’s service and the women’s sick call. I also did psychiatric evaluations upon all admissions which averaged about 10 to 15 a week. My ideas about heroin addiction stemmed from psychoanalytic readings. My expectations were that these were orally regressed depressed patients who on deprivation of their essential narcissistic supplies provided by heroin would plunge into psychotic depression. Fortunately there were very skilled nurses at the hospital who suggested that I had a lot to learn– on the other hand there were a very skilled psychoanalytic staff that did not contribute anything useful. The methadone withdrawal was carried out very skillfully in liquid form. 30 to 50 mg methadone daily, as a start, supplemented by 200 mg of pentobarbital at night –the entire weaning process was usually completed within a week. The patients were examined daily both physically and mentally with particular attention to the Himmelbach’s signs as indicators of uncompensated withdrawal. During withdrawal the patients largely stayed in bed. On rounds they had a litany of physical complaints but nothing very major. When withdrawal was complete they were transferred to the Lexington Hospital, which was a medium security federal penitentiary, which consisted of 1000 beds, about 800 males and 200 females. The volunteer patients, about 15%, signed up for a 45 day withdrawal, but could leave at any time which was usually about 7 to 10 days. They often referred to their stay at Lexington as cheapening the habit. The rest of the inmates were federal prisoners almost all of them convicted of mail theft. They had prison sentences usually about five years long. The big surprise was the status of the patients after withdrawal. There was little or no signs of depression although there was plenty of complaint about being stuck in prison. The women who I knew best had a fair degree of emotional lability that ranged between sulky complaints about pelvic inflammatory disease to good-natured fooling around laughing and telling jokes. Patients communicated with each other by means of a covert kite line that security knew all about. These letters were regularly monitored for signs of severe depression or talk about suicide. In that case they were brought to me for review and then the patient was interviewed. In each case their tone was of exasperation and the hope that they would be given special privileges. In the two years that I was there , there were no suicides. You understand this was well before the use of antidepressants. Naturally we were very interested in the onset of addiction. The women were almost entirely prostitutes which actually anteceded their addiction. Prior to the prostitution career they had been sexually very active and popular with high self-esteem. The story that I heard repeatedly was that some friend would point out to them that they were sitting on a gold mine. What they were giving away for free could really bring them close to the big money. Otherwise the potential economic career was dismal. However, the career of a freelance prostitute is difficult because of their need for protection, which then put them on the string of a pimp. On the whole their relationship with the pimps was mutually gratifying as he provided customers, made sure that they were not robbed, split the intake with them, rarely roughed them up and most surprising held out the promise of a one-on-one relationship where they could live in reasonable retirement and sexual gratification. These women were very hardheaded and cynical , yet on this particular point they were utterly unwilling to be critical. The entry into addiction occurred sometime after the entry into prostitution and was often supported by the pimp and their colleagues. This was often the happiest time and was referred to as the honeymoon. They thoroughly enjoyed heroin and rarely experienced any distressing withdrawal effects. Prior to discharge there were frequent fantasies of returning to addiction and not being straight. However some few said they were fed up and afraid of jail. They often said they had stayed clean for some time but somehow or other had bumped into the possibility and could not withstand temptation. Abe Wikler MD believed that they were suffering from a subclinical conditioned withdrawal that drove them back to addiction. This was not obvious since during this period they did not report excess lacrimation or rhinorrhea or preoccupation. With regard to not becoming an addict despite using heroin, it was reported that many could “chip” shooting up on weekends and able to avoid the addict’s life. I don’t know what the data is here-if any. It was clear that the introduction to an addict’s life was not simply the pleasures of heroin but part of a major role shift anteceding heroin. I don’t know if conduct disorder was a still earlier stage. Contempt for being straight was general. That they stayed addicts for fear of withdrawal did not seem the case, at least then. There was no trouble volunteering for Lexington or Fort Worth and undergoing methadone withdrawal which most said was no worse than a mild flu. Rodent heroin dependency seems a limited model of the human process.

Dr Koob replied, “No comment but Dr. Klein is just plain ignorant and needs to educate himself.  We have many reports of rats who ‘gave it up’ for a hit of smack and as I’ve said before, the rat is an excellent model for alcoholic behavior.  As for Dr. Klein, just replace ‘GP’ with ‘Old age’ in the diagram and you can clearly see why he doesn’t get it.  And as for AddictionMyth, just replace the whole middle part with a horse’s ass.  Now as for me, my AMG is telling my OFC that I’m late for ‘tea’ with Dr. White.  And you DON’T want to keep White’s DS waiting!”

NIDA/NIH: Why Are Drugs So Hard to Quit?