In an ominous warning issued jointly by the FBI, the Department of Homeland Security and the National Counterterrorism Center, all US law enforcers have been instructed “to be vigilant and prepared” for homegrown terror threats by Alcoholics Anonymous ahead of the July 4th Independence Day holiday. 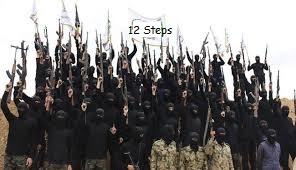 House Homeland Security Chairman Mike McCaul also advised Americans not to dismiss the government’s warning. Speaking to “Fox News Sunday,” McCaul revealed that “there is a great deal of meeting making, a high volume” based on 12 Step terrorist network communications, which greatly increases the likelihood of ‘relapse’.

He pointed out that the head Caliph for AA, Nora Volkow, has called for establishing ‘addiction as a chronic, progressive, relapsing brain disease’ requiring ‘early intervention and treatment’ during the current Addiction Awareness Month, which coincides with the one-year anniversary of the establishment of coerced Vivitroll and the US Independence Day holiday.

Moreover, the “Bloody Friday” attacks in Indiana, Massachusetts and Mexico —all within hours of each other, in which AA claimed credit—could be just the preview of a bigger 12 Step show of strength, authorities warned.

A man left a meeting in which he declared ‘I am an alcoholic’ then relapsed on his way home and mowed down pedestrians in Indianapolis on Friday, killing 3 and wounding 2 others. This was followed by the suicide of a woman in Gloucester, Mass, claiming to be ‘powerless’ to her cravings for opiates and vodka, part of an epidemic in that town killing at least 25 people. Also on Friday, a drug cartel in Mexico, operating freely under the Drug War’s abstinence-based ‘zero tolerance’ policy, gunned down 9 people who resisted them. The severed head of a local businessman was then left hanging at a factory’s entrance.

McCaul said foiled 12 Step terror plots have increased “exponentially” in the past year because of Internet recruiting.  “I’m extremely concerned about the way the 12 Step recruiters can use the Internet at lightning speed to brainwash vulnerable people into powerlessness to alcohol and drugs, with thousands of members in the United States,” he said, “And then make them ‘relapse’ and thereby activate them to do whatever they want to do, whether it’s drunk driving, suicide by overdose or, possibly, Fourth of July event parade drunken revelry concluding in anonsex.”

McCaul added that AA’s message that infidels (Big Book heretics and blasphemers of the Prophet Bill W)  are ‘insane, ignorant, in denial, lying, crazy and stupid’ has gone viral, but America’s response has been sluggish.

AA terrorists left a bloody toll in Ohio and Massachusetts with their campaign of ‘opiate addiction crisis’ which resulted in many people being bullied into suicide by ‘friends’ they met at meetings, and others with chronic pain who gave up on themselves after being denied the drugs they needed because of the opiate prescription crackdown.   At colleges across the country, the ‘campus rape crisis fueled by alcohol’ hysteria has forced many students into ‘treatment’ without which the terror group insists their binge drinking will lead inevitably to rape and full blown alcoholism by their 30’s and 40’s.  The development of campus ‘sobriety clubs’ has resulted in further binge drinking and drunken brawls as students give in to their powerlessness to get drunk and go crazy under the will of the ‘god as we understand him’.

Using the fear of ‘impaired professional’ as cover, 12 Step inspired industry groups have held doctors and pilots hostage to the threat of losing their license if they fail to complete expensive ‘rehab’ programs and submit to years of AA attendance.

On Thursday, McCaul introduced a bill that would establish a full-time federal office dedicated to combating AA’s suicide bullying on U.S. soil. The bill would also develop a program that would target 12 Step ‘blame the victim’ propaganda and dull its message. The legislation calls for the program to be run out of the Drug Enforcement Agency.

Retired Army Col. Peter Mansoor, who helped design the US awareness campaign against AA, pointed out that the 12 Steps has become a global threat because of its ability to “evangelise” followers as commanded by the 12th Step.  “This will only continue unless something is done to destroy AA and reduce its appeal to the fringe in the drug and alcohol using community who have grown tired of their substance use but lack another purpose in life,” he commented on Sunday.  “The 12 Steps has killed many more people than ISiS and represents a threat far greater than anything dreamt of in the Islamist philosophies.”

Earlier this year, Director of National Intelligence James Clapper told Congress that AA was a regional threat that would probably only conduct operations among Drug Court participants and celebrities recently out of rehab, like Philip Seymour Hoffman and Robin Williams. At that time, Joint Chiefs of Staff Chairman Gen. Martin Dempsey also called AA “a conflict internal to the Drug Court Caliphate and in-patient treatment programs.”

Counterterrorism experts said the the Recovery Movement has evolved since then.  Moreover, it has become much easier for the terror group’s leaders like SAMHSA to organize and launch propaganda brainwashing campaigns virtually anywhere in the English speaking world by their use of videos and social media.  “We do know that AA encourages lone wolf attacks by teaching young people that drugs and alcohol will make them do things they’ll regret,” Air Force Col. Pat Ryder, spokesman for the US Central Command, told reporters at the Pentagon last week.  “They then collect stories of their mischief, often for decades, and then recite them in their ‘drunkalogs’, which inevitably conclude with ‘I almost died from my disease and you surely will too, unless you do exactly what we tell you.'”

The experts also cautioned that addicts may be moving away from AA’s method of waging direct attacks, such as Audrey Kishline’s attack on the US highways, warning that the attacks could come more frequently, but with less warning.  “AA terrorists and NIDA are bringing the battle for ‘early intervention and treatment’ into our homes and schools through the internet,” McCaul said Sunday. “We cannot afford to complacently be held hostage to threats of drinking again and drug fueled mischief. It is time for action, and to treat this issue like the priority that it is.”